Which Cars Are the Cheapest (And Most Expensive) To Insure?

MOST DRIVERS ARE WELL AWARE OF THE EFFECT ON THEIR AUTO INSURANCE PREMIUMS OF SUCH PERSONAL FACTORS AS AGE, DRIVING RECORD, AND PLACE OF RESIDENCE. LESS APPRECIATED, PERHAPS, IS THE EFFECT ON YOUR PREMIUMS OF THE CAR YOU CHOOSE TO DRIVE.

We're not referring to cars like the $200,000 Lamborghini Aventador — the premiums for which average $6,816 a year, according to Finder.com. Even the commonplace cars we researched differed significantly in premiums between categories and the specific make, model and year of vehicle.

According to the AAA, the average cost for full-coverage car insurance (that is, collision and comprehensive in addition to liability coverage) last year was $1,194 a year. But you'll pay $1,089 — more than $100 less per year than the overall average — to insure a small SUV, and $1,328 to insure a small sedan, which is more than $150 above the average for all vehicle categories.

Within a vehicle class, too, insurance costs can vary my model, sometimes considerably. For instance, data from automotive analytics firm Vincentric shows premiums for vehicles of the same stripe can easily vary by $350. In the compact SUV/crossover category, the cheapest model to insure is the Subaru Crosstrek, with an average $861 premium. The most expensive model in this category is the Mitsubishi Outlander Sport at $1,377. The cheapest midsize sedan to insure is the Subaru Legacy at $1,050; the most expensive is the Volkswagen Arteon at $1,463. (Vincentric used the 2020 model year for all of these examples, averaged across states and assuming an annual mileage of 15,000.)

The Insurance Institute for Highway Safety tracks average insurance losses by model — since insurers' costs drive premiums, this data is helpful for extrapolating which cars are more expensive to insure. The IIHS looks at six categories of losses: collision, property damage liability, comprehensive, personal injury protection, medical payment and bodily injury. Parsing the data shows that several Subaru models, for instance, tend to cost insurers significantly less when they pay out claims for injuries or damage.

Read on for a list of some of the least and most expensive cars to insure, followed by a deeper look at the reasons cars can vary in insurance cost.

Although the exact rundown varies by outlet and year, there are a handful of perennial entrants on the roundups published by automotive publications and online insurance platforms like TheZebra.com and Insure.com of the cheapest cars to insure.

Here are half a dozen of the least expensive cars to insure. From left to right, and in no particular order, starting at the top, they are the Subaru Outback, Mazda CX-3, Fiat 500X, Honda CR-V, Jeep Wrangler, and Ford Escape. 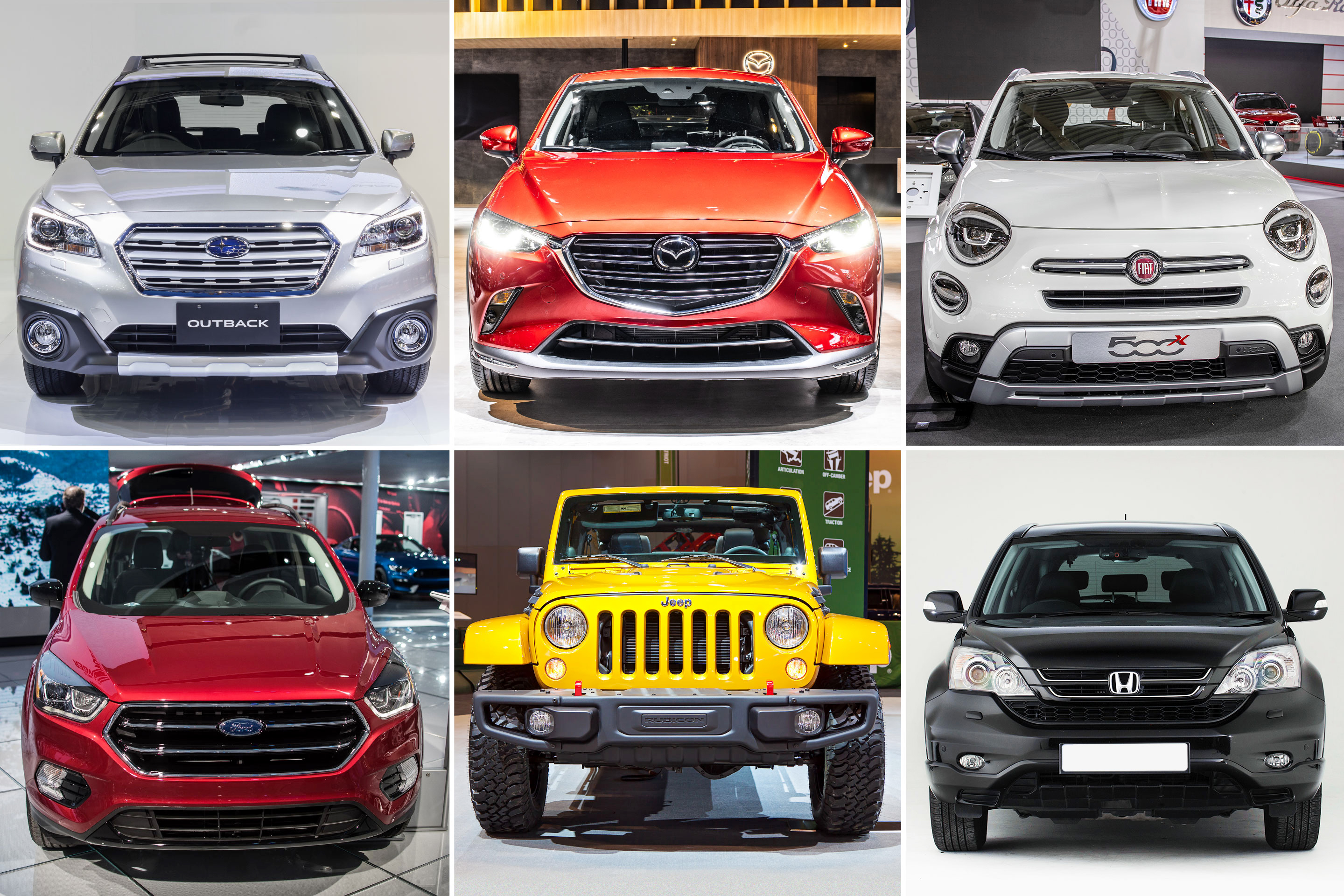 These aren't the very most expensive, in the class of Maseratis and Bentleys, but rather the ones that you wouldn't be surprised to see on your daily commute (or in your neighbor's driveway). These cars cost below six figures but still cost a lot to insure, according to The Zebra and Insure.com. For instance, Automotive News found that Tesla's entry-level, $35,000 Model 3 cost more than $2,800 a year to insure — nearly as much as you'd pay to insure the $99,000-and-up Porsche 911.

Here are five of the more expensive cars to insure that are not in the super-luxury class. From left to right, and in no particular order, starting at the top, they are the Tesla Model 3, Tesla Model S, Tesla Model X, Porsche Panamera, BMW 7 Series, and Dodge Challenger SRT Hellcat Redeye edition. 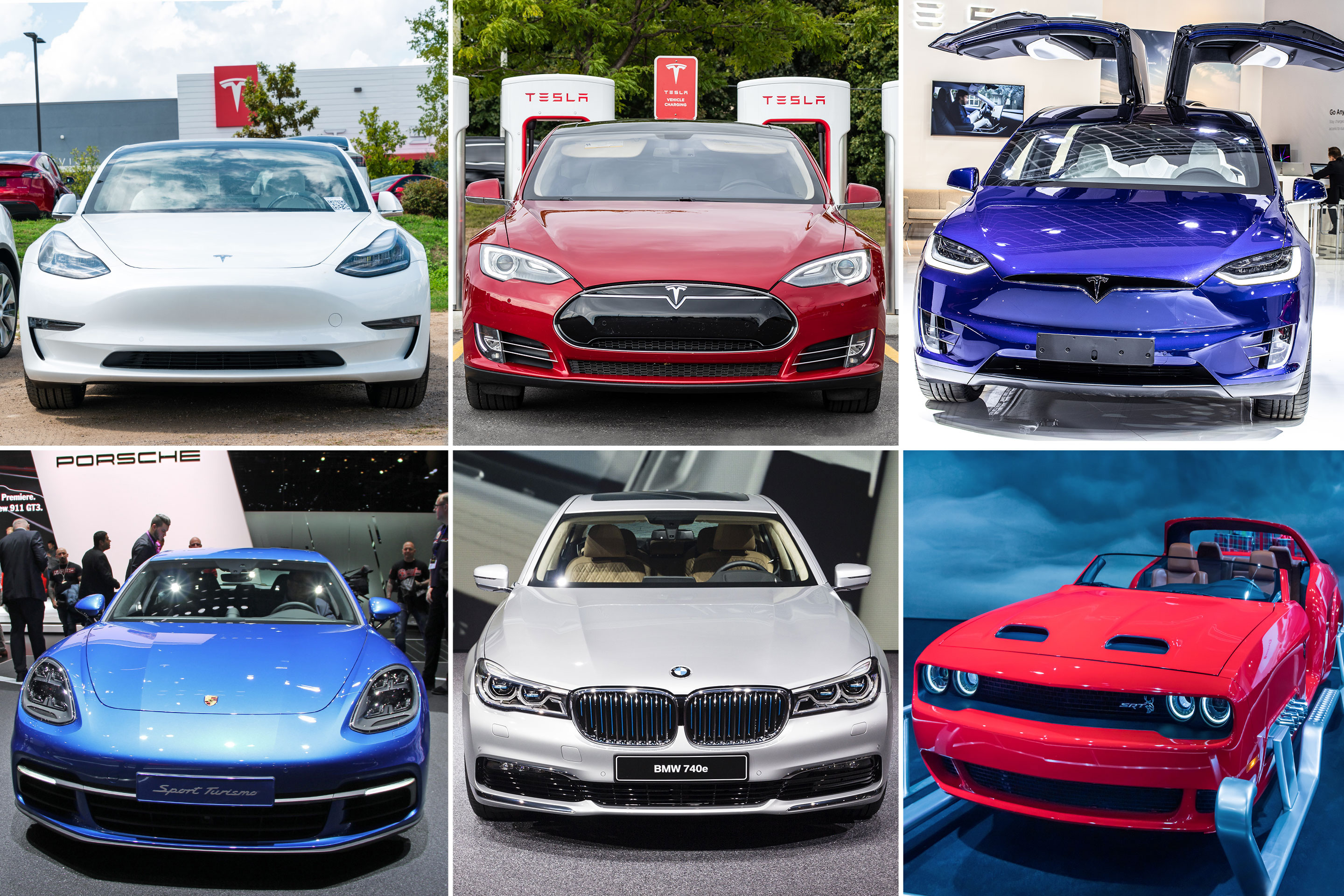 What Affects A Car's Insurance Cost

Here's a look at the (sometimes surprising) factors insurance experts say can make a car more or less expensive to insure.

Among those is the car's allure to thieves. How often a particular make and model of car gets stolen is an important part of the math of car insurance. Cars that are stolen more often create more claims that must be paid out.

Thieves' favorite targets are surprisingly mundane. "The cars most likely to be stolen are cars you'd scarcely take a second look at — common Toyotas, Hondas, domestic brands," says Robert Hartwig, professor and director of the Risk and Uncertainty Management Center at the University of South Carolina and past president of the Insurance Information Institute.

These vehicles are also popular overall, which is not a coincidence, according to Hartwig. He says these models are often stolen so they can be taken to "chop shops" and broken down to be sold for parts. It's the law of supply and demand: The more of a particular model is on the road, the more demand there is for its radiators, fenders, air bags and so on.

The relative cost of repairing accident damage also factors into premiums. As a rule, it costs more, to insure a car that's expensive to fix after a crash than one whose repair bills tend to be more modest. Ironically, some high-tech features automakers are adding to help you avoid accidents go a long way towards driving up those costs, even as they make driving safer overall.

Safety features like "crumple zones," which allow the car's bodywork to more fully absorb the impact of a crash, and air bags can and do save lives, but they also make fixing a car after a crash more expensive. And that bodywork may have some pricey new technology embedded within it. "There are increasingly sophisticated electronic components, such as sensors in the front and back that, when damaged, can cost thousands of dollars to replace," Hartwig says. "We're not even talking about Teslas here, we're talking about features that are increasingly standard."

Often just referred to by the acronym ADAS, this new technology includes computers, sensors, and cameras that are deployed to perform functions like collision warning and avoidance, lane-change and parking assistance, as well as more sophisticated operations like emergency driver assistance (to prevent a crash if you fall asleep at the wheel, say).

Hartwig cites expensive auto-braking features as among those that are spreading. According to the IIHS, four automakers — Audi, Mercedes-Benz, Tesla and Volvo — now include Automatic Emergency Braking (as it's officially called) as standard on all their new car models, but that's going to change soon: A new law that comes into effect in 2022 will mandate AEB on all new cars.

Of course, safety features also save lives and reduce injuries, which can reduce both the cost of settling injury claims from crashes and the suffering those cause. Indeed, higher costs to repair cars loaded with safety features is a bargain many drivers are willing to accept, Hartwig says. "The pattern in automobile safety is for safety equipment to be introduced as an option for which people will pay more. Over time, the government tends to make these features required, but part of it also is consumers are willing to pay for safety in vehicles."

More than sophisticated safety features affect the injuries vehicle occupants can suffer after a crash. For example, insurance industry experts say the higher profile and design of SUVs makes them (generally speaking) safer than cars in accidents. That means a lower likelihood of injury in many SUVs, and thus of as many claims for high medical bills from SUV occupants.

Other implications of vehicle design

Several other aspects of a vehicle can affect its insurance costs. One of those is how much damage your car will do to the other guy if you get into a collision. Here, SUVs, and especially fuller-sized models, may lose some of their cost advantage from better protecting their occupants.

These vehicles are bigger, heavier, and taller than sedans, which means they can inflict more damage. When SUVs first became popular, their weight combined with design — a higher center of gravity that contributed to a propensity for rollovers — also made them more expensive to insure.

Cars that can be described as "sports" or "performance" often cost more to insure, as well. "Part of the higher insurance cost is attributable to the fact that the vehicle is simply more valuable because of the bigger engine," Hartwig says. The adage that speed kills also comes into play here. A bigger engine also lets the driver go faster — and speed can contribute to the severity of accidents.

An emerging technology that affects rates, on at least certain models, is alternative fuel sources. Among four-door midsize cars, seven models have significantly higher-than-average collision loss rates, according to the IIHS. Of those, five are electric or hybrids. "If you have to replace a vehicle battery, that's very expensive," Hartwig says.

What Doesn't Count Against a Car

One car insurance myth that tends to circulate as conventional wisdom is that cars of a certain color — namely, red — are more expensive to insure. The presumed reason is sometimes cited as a greater preponderance for accidents or theft.

Not true, says Mark Friedlander, director of corporate communications at the Insurance Information Institute. "There isn't any" veracity to the idea that being red — or any other hue — increases a vehicle's premiums. "Color of the vehicle has no bearing on the insurance cost," he says.

On the contrary, Hartwig says that the increasing prevalence of sophisticated anti-theft electronics that let you track or even disable vehicles remotely is likely to lower the incidence of theft on expensive cars. "The higher-end cars are getting very difficult to steal. This notion that you just need to rip out a few wires and touch them together to start the car isn't really the way it works."

While most people don't consider insurance costs when drawing up a vehicle budget, they should, Hartwig says. If there's a particular car you have your eye on, he suggests calling your insurer for a quote so you're not caught by surprise. "What I recommend is, before they drive off the lot and do a test drive, they should go online and get a quote for that vehicle… They should get a quote for every vehicle they plan to test drive." It's also a good idea to shop around beyond your current insurer, to be sure their quote is competitive.

Anti-theft and immobilization devices like alarms, VIN etching and smart keys can often reduce your insurance premiums — it's an especially good idea to look into if you own a model that is often stolen.

Another way to cut your premium is to adjust your deductible, Friedlander suggests. "If you increase your deductible — say you double it from $250 to $500, you might be looking at 10% less," he says.

You can still view our website, but for a better experience, we recommend updating your browser.